In Search of Deeper Learning: The Quest to Remake the American High School 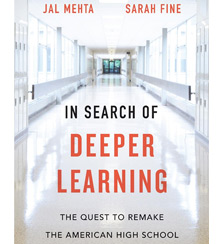 If you went to high school in the U.S., you are familiar with the typical school day. Students sit at rows of desks, listening to the teacher lecture, perhaps coming up to the board to solve a problem, or meeting in small groups to fill out a worksheet. Considerable amounts of class time are spent preparing students for the high-stakes tests that dominate the college admissions process. Even at the top end of the achievement spectrum, students complain they have to stuff huge numbers of facts and theorems into their brains, only to forget them after the tests. When asked about the best parts of high school, students are likely to cite one or two classes, often electives, as well as their time participating in all-consuming extracurricular activities such as theater, debate, or the school newspaper.

This assessment came as a surprise to a pair of education professors, Jal Mehta of Harvard’s Graduate School of Education and Sarah Fine of High Tech High’s Graduate School of Education, who had set out on a cross-country research tour to find out how the best public high schools in the U.S. exemplify what is known in the field as deeper learning. Deeper learning is defined as a set of competencies that include content mastery, critical thinking, collaboration, and effective communication. Mehta and Fine define it as the place where “mastery, identity, and creativity” meet. Students who have engaged in deeper learning have strong expertise in a field, learn to identify themselves as practitioners of the discipline, and acquire the ability to create something new, such as original scholarship or art.

As Mehta and Fine sat in hour after hour of interminable lecture classes, they realized that these top schools, for the most part, were not providing deeper learning opportunities to students at all. And if students were engaging in deeper learning, it was happening on the outskirts of the core curriculum. Elective classes, often available only to the oldest students who had completed a state-mandated curriculum, allowed teachers to delve into a narrow topic within a subject, generally something they themselves were passionate about teaching. Students who signed up for these electives had some level of interest. And because there frequently was no standardized test at the end, teachers could assign group projects and other innovative lessons.

Students also told Mehta and Fine that they cherished the hours they spent after school working on extracurriculars: painting elaborate sets in the auditorium for drama productions, or learning to hang stage lights, or taking charge of a whole show as a stage manager or student director. Although it’s tempting to view extracurriculars through the prism of college admissions, the students told the researchers that they valued the real-world nature of their extracurriculars, the way that everyone worked together frantically to mount a theater production.

The book is a subtle indictment of the way we’re teaching our children in the U.S., even in progressive, well-funded, reform-minded schools. But in its analysis of what works and what doesn’t in American high school education, In Search of Deeper Learning provides several helpful lessons for business executives. “People learn well when they are motivated and have a purpose, and when they are parts of communities that have different levels of expertise than they do,” Mehta told me. “That has implications for businesses.”

When companies list the skills they expect incoming employees to have — or the skills that make executives successful later in their career — they’re not likely to include the ability to regurgitate the dates of the Crusades. Instead, they’re looking for the skills that students get from an education filled with deeper learning: the ability to see connections across disciplines and time periods, to collaborate in groups in order to achieve a goal that may be unknown at the start or may change over time, and to understand why a math theorem makes sense. If executives want their hires to have those skills, they should be advocating for a school system that develops those skills in students.

The lessons the researchers gleaned from the best teachers they observed are useful for managers as well. Those teachers stand out by sparking kids’ interest from the beginning of the school year with tasks and class projects that make them think about the subject. The kids learn the mundane tasks such as conjugating verbs, but do so in the service of a bigger goal. Understanding how the best classrooms operate can help managers keep their employees engaged.

The researchers’ analysis of extracurriculars also carries important lessons for businesses. Much as students ultimately do with jobs, they choose their extracurriculars carefully, creating a community of people with shared goals. Those who were in an immersive club or activity in high school likely remember the feelings of camaraderie, excitement, stress, intense focus, and all-hours work that accompanied mounting a school play, putting together a yearbook, or preparing for a Model U.N. competition. This is why students strongly identify with these activities years later (“I’m a debate person”). And it’s why the skills they absorb through those activities tend to stick. Companies that can engender these feelings at work — or through extracurricular activities at work — will likely gain employees’ loyalty.

There’s also the importance of apprenticeship. In a high school drama production, the older kids teach the younger ones how to build the sets, sew the costumes, and manage the backstage crew. In the corporate world, the apprenticeship model is a well-established tradition, enabling skilled practitioners to hand down their craft to junior artisans. This holds even in non-craft fields such as software engineering, where developers learn from those more experienced and, in turn, help younger engineers with their code.

It is unclear whether high schools will embrace the type of deeper learning Mehta and Fine advocate. But even if students don’t arrive in the workplace with those skills, executives can help ensure that their employees experience this type of learning at work.

WHAT THE TOP INNOVATORS GET RIGHT

A strategist’s guide to upskilling

Why You Shouldn’t Slash Prices in the Next Recession