Walter Chandoha’s fascination with cats began when he rescued a mewling kitten from a frozen alley in New York. This fateful encounter with “Loco”, the name inspired by his nightly ritual of frenzied sprinting around his new owner’s flat, would set Chandoha on a path to becoming the master of cat photography. During his 70-year career he took more than 90,000 photographs of cats, enthralled by the variety of their poses and expressions. Many of these photographs graced the pages of National Geographic and Life magazine. Commercially, he was phenomenally successful: if you walked down the pet-food aisle of an American supermarket in the 1950s or 1960s, almost all the photos you’d see on the packaging would be his.

Chandoha, who died this year and is the subject of a book by Taschen, was born in Bayonne, New Jersey on November 30th 1920. When he was a teenager, he experimented with his family’s Kodak camera, whose viewfinder was at an awkward 45-degree angle. “You couldn’t see your subject, but you could guess,” Chandoha recalled. He spent hours buried deep in a cupboard, a makeshift dark room, developing photographs. After high school he became an apprentice to Leon de Vos, a photographer who worked in the advertising industry in Manhattan. The pay was measly. But he learnt various tricks of the trade, including how photographs could be improved with intense backlighting. In the wake of the Pearl Harbour attack in December 1941, Chandoha was conscripted into the army and posted to the Pacific, where he became a combat photographer. The experience he gained capturing motion would stand him in good stead.

Home from the war, Chandoha enrolled on a marketing course at New York University. When he wasn’t studying he was pounding the city’s sidewalks, documenting the minutiae of daily life. It was there, on a winter’s night in 1949, that he was to meet his muse. Encouraged by his wife Maria, he sent pictures of Loco to newspapers and entered them into competitions. Chandoha’s talents were soon spotted by magazines like Look and Women’s Home Companion, which began to commission him. The advertising agencies of Madison Avenue came calling too. After the second world war, pet ownership in America increased. As symbols of the suburban domestic idyll, alongside television sets and bakelite kitchenware, cats and dogs were increasingly used to promote a brand’s “family values”. Chandoha’s images were used in campaigns for Ohrbach’s department store on West 34th Street and pet-food brands like Puss’n’Boots and Friskies.

Chandoha immortalised his subjects’ subtleties of expression and peculiarities of character, from a slow blink to a flash of a pink sandpaper tongue; from nuzzling noses to warning hisses. He took great pains to get the perfect shot: dropping to the floor to meet the cats at eye-level, strategically positioning tasty treats and getting their attention by meowing or squawking. Some people criticise cats for their imperious, unknowable nature. But Chandoha knew something that they don’t: if you have the patience, cats will reveal their personalities to you; and if you’re lucky, even some of their secrets. 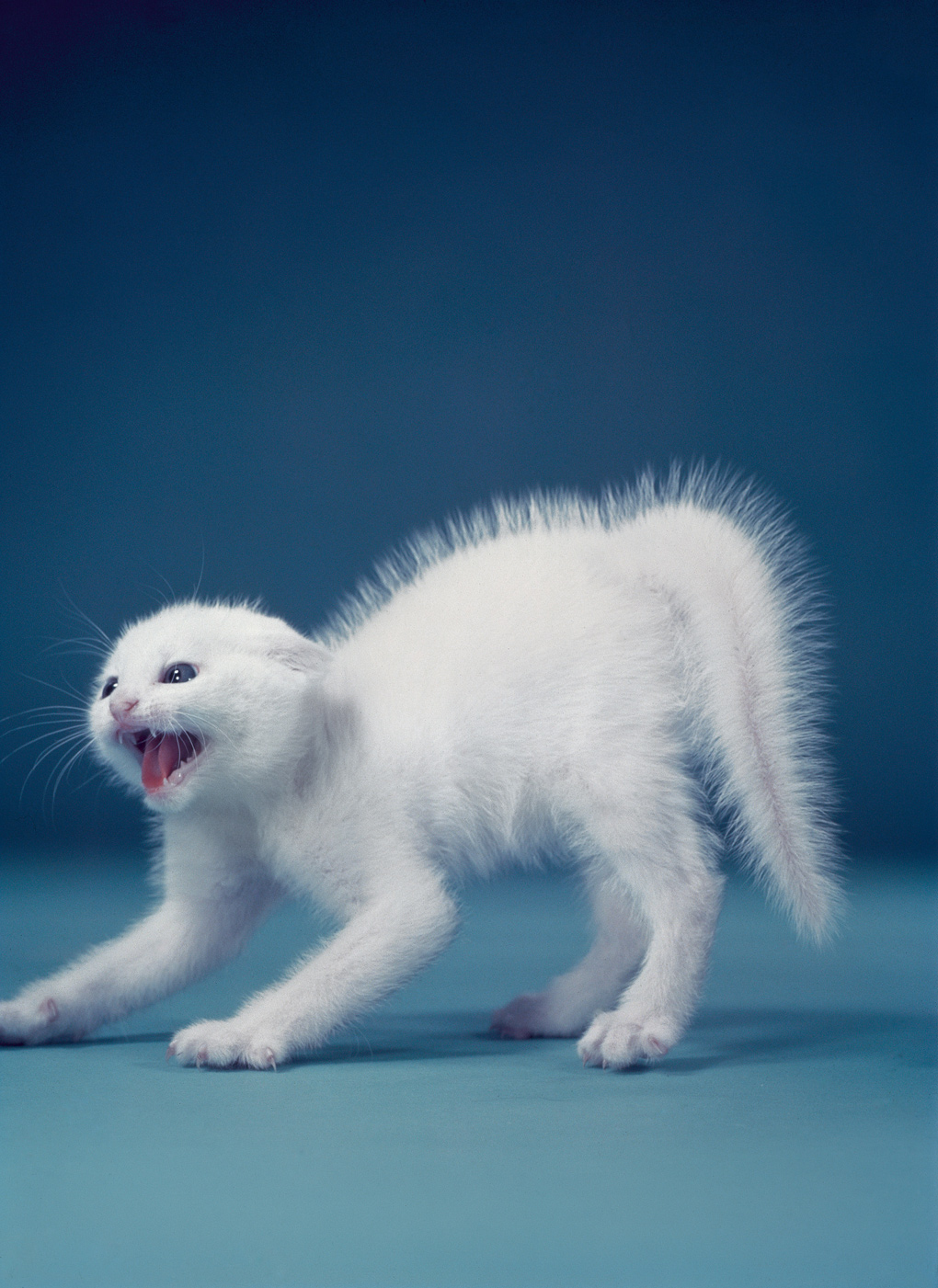 Chandoha typically used six lamps to illuminate his subjects, letting him highlight tiny details like individual hairs. Here, his backlighting technique emphasises the arched spine and taut posture of a kitten meeting a dog for the very first time.

Susan Michals, in her introduction to the book, explains how Chandoha was influenced by the paintings of Johannes Vermeer, and strove to achieve the same luminous quality in his photographs. While Chandoha looked to the Old Masters, he in turn inspired contemporary artists. Andy Warhol was one of his fans, using Chandoha’s photographs as a reference for his rainbow-hued cat illustrations. 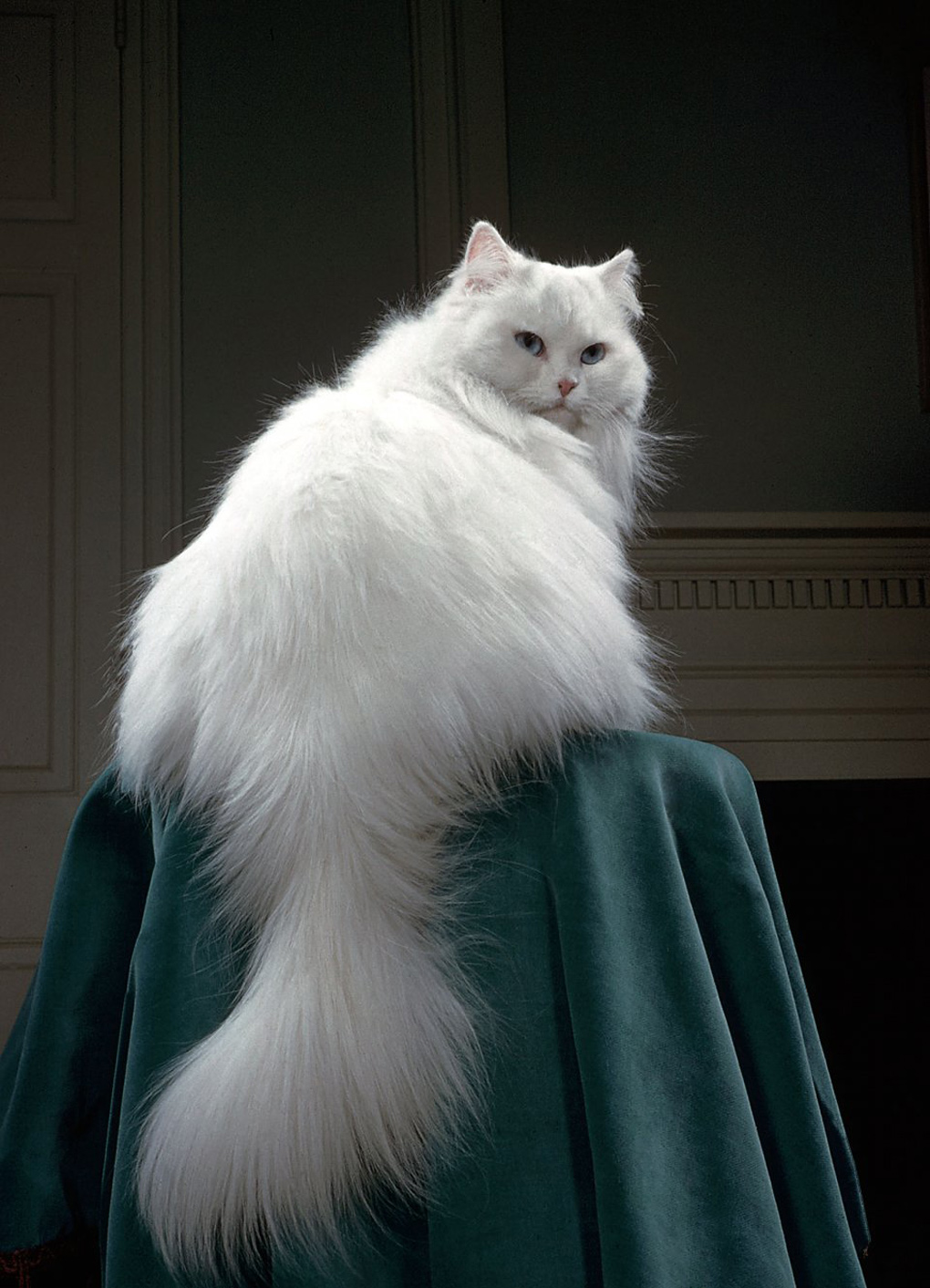 You can almost feel the softness of this luxuriant ball of fur. Chandoha has imbued the photograph with the high-gloss, colour-saturated glamour we would more commonly associate with a mid-century photoshoot for Life magazine. Displaying complete insouciance, this Persian starlet is the Rita Hayworth of the cat world. 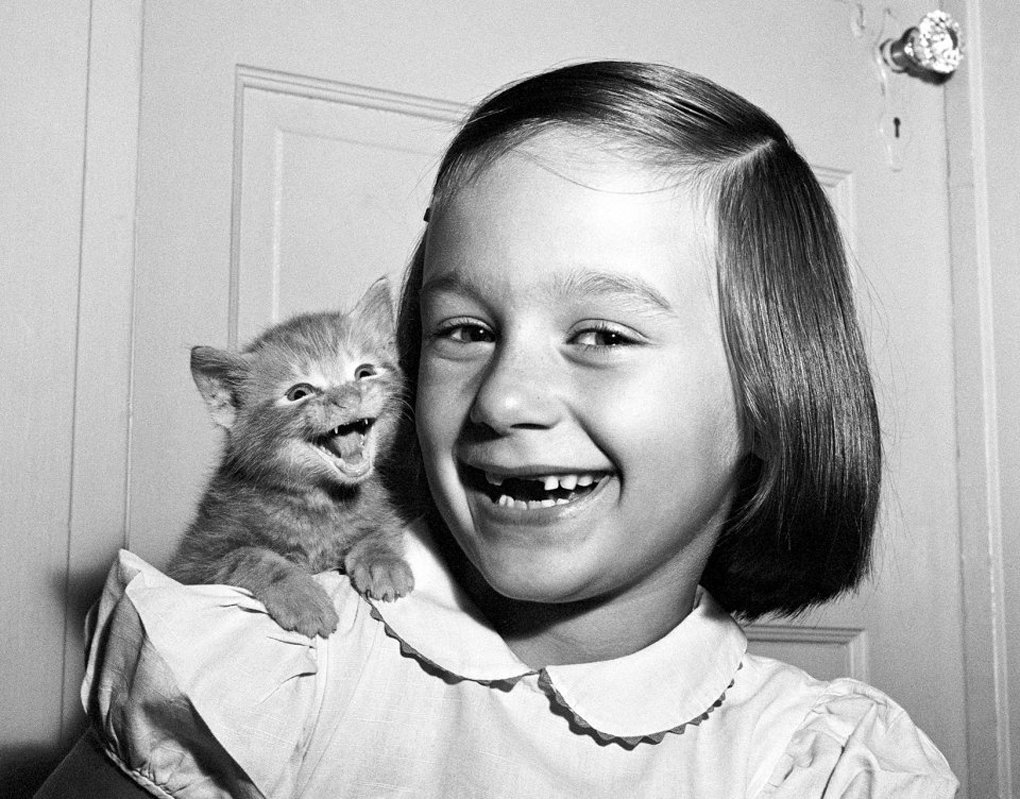 It’s a good thing Chandoha ignored that old warning about working with children and animals. This picture of his daughter, Paula, with a kitten, mid-meow, is one of his most famous.

While Chandoha’s children posed as models, his wife Maria was his secret weapon. She soothed the cats by stroking and talking to them while he was setting up the shot. She could sense from the tension in their muscles whether they were ready. Then, the creature poised just so, she would tell Chandoha that the cat was ready for its close-up. “She had magic in her hands”, he said.

Chandoha knew that understanding feline behaviour was the key to a good photograph. He once sought advice from a circus tiger-tamer who told him that “to get the shot, you need three things: sound, patience and food.” Chandoha found that the click of a can opener would often do the trick. 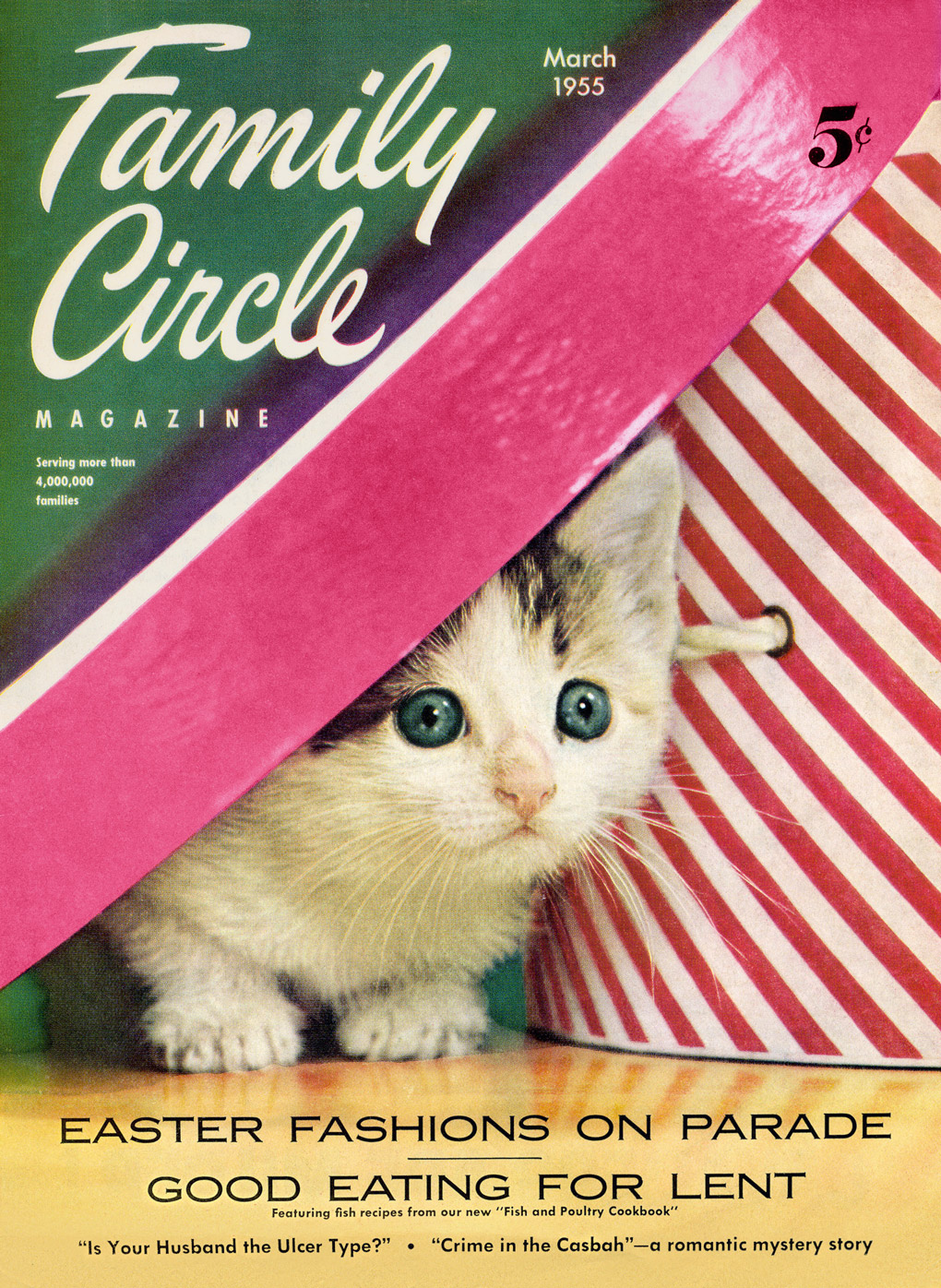 Chandoha preferred to work in black and white but knew he had to embrace colour photography to achieve commercial success. He framed his subjects with bold backdrops in highly saturated, jewel tones of turquoise, burgundy or magenta. Chandoha was prolific. His images graced more than 300 magazine covers and hundreds of pet-food packages, but also featured on jigsaw puzzles, greeting cards, T-shirts, posters and calendars. 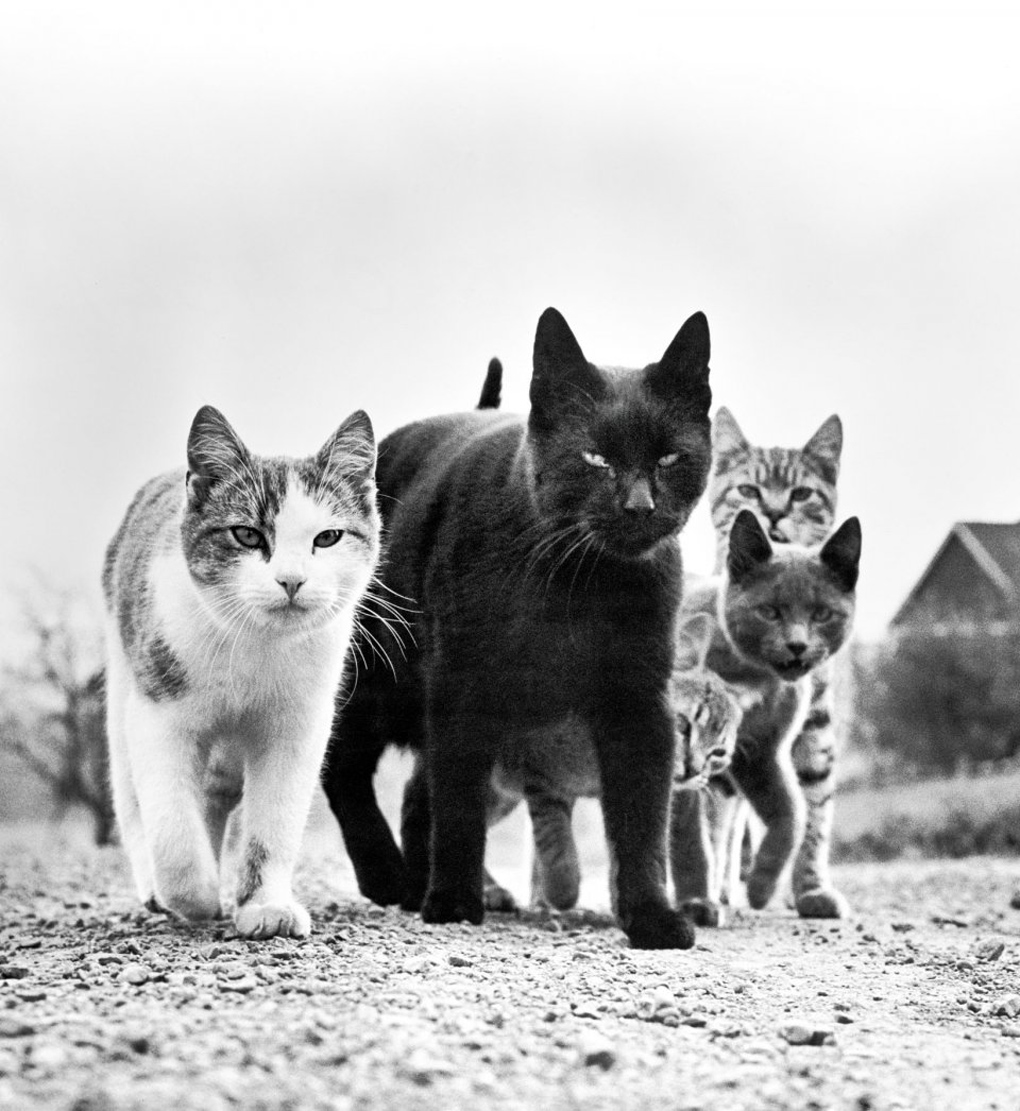 Most of Chandoha’s cat portraits were taken in his New Jersey studio. But he also liked to head outside to shoot his subjects in the wild. This image of a gang of cats prowling along the street is one of his best known. The ringleader of the pack pricks his ears up and keeps a steely focus while the others follow suit. They patrol their turf with purpose and keep an eye out for interlopers. To get this particular shot, Chandoha lay on his front to be at the same level as his subjects. 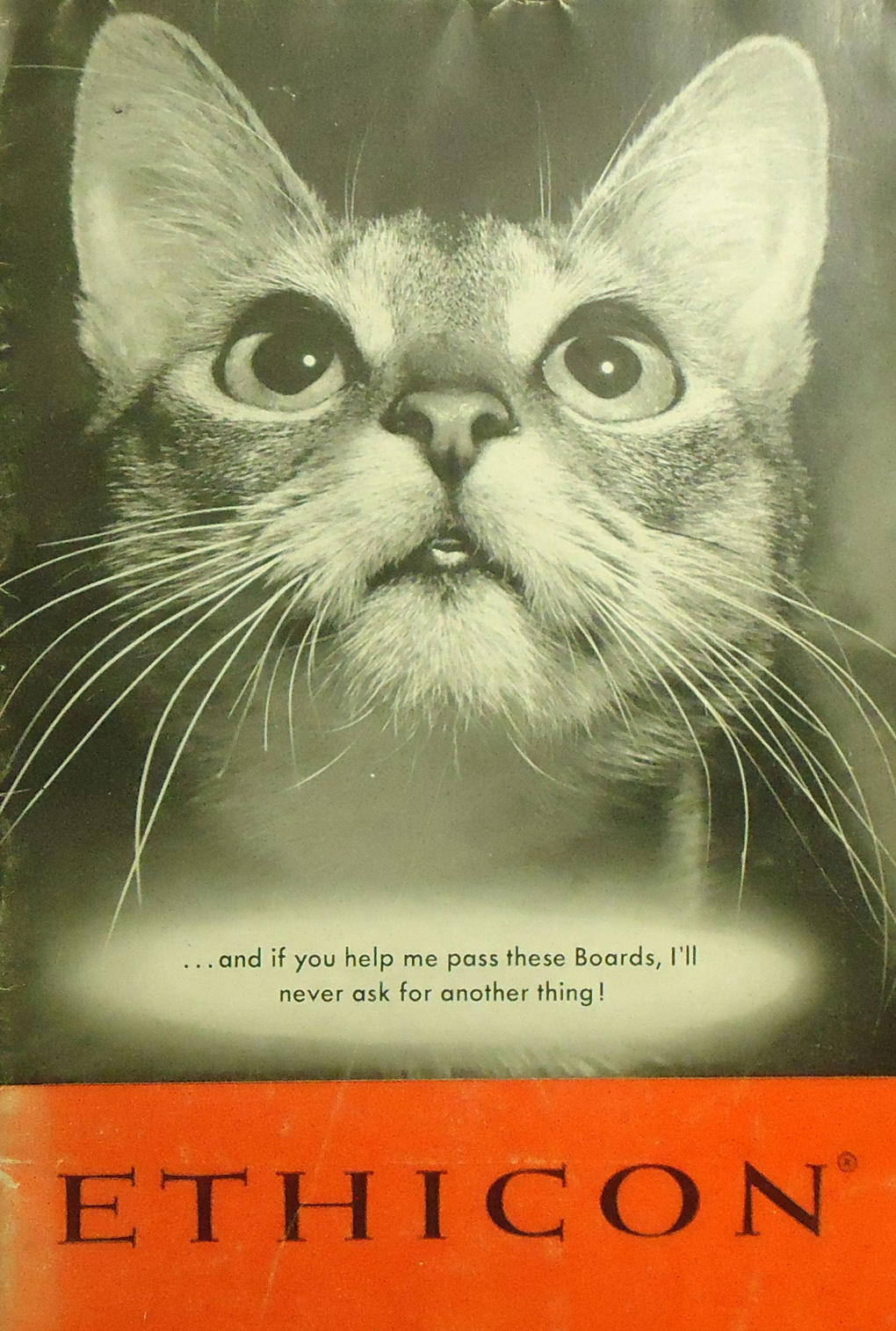 Chandoha was a pioneer of the modern cat meme. In 1950 Ethicon, a division of Johnson & Johnson whose main business was supplying surgical sutures known as catgut (made in fact from sheep intestines), asked him to create a “cat-a-log” of images with funny captions to boost the morale of hospital staff. In one picture a kitten gazes into the distance, lingering under a blanket. The caption reads: “Nurse…I had to ring that bell four times!” The booklets were such a hit that millions of copies were printed. 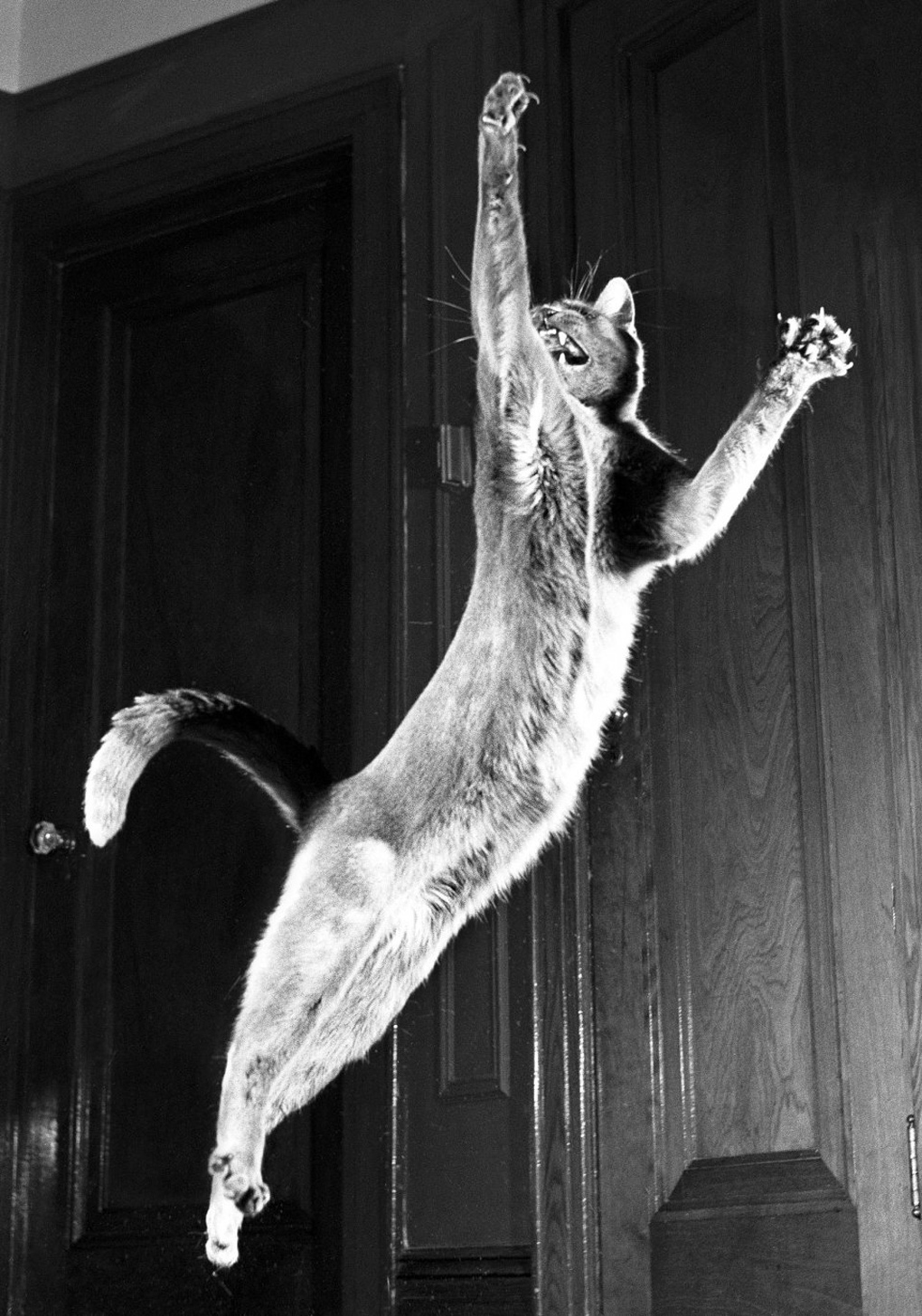 Chandoha’s original muse is captured here in all his sinuous elegance. His limbs outstretched and claws unsheathed, he moves through the air like an acrobat. The beauty of his feline form is undeniable, as is Chandoha’s love for his subject.

How the heel got its height

Elif Shafak: the coffee cup that reminds me of Istanbul